WAM was delighted to have Diana Biggs, VP of Uphold, the fastest growing money platform, speak at our latest dinner on how digital currencies can enable financial inclusion.

Today, more than 50 percent of the world’s adult population is denied access to affordable banking or basic financial services. Globally, 2.6 billion people are considered ‘unbanked’ or ‘unbankable’. The World Bank has identified cost and travel distances as two of the key reasons that 73% of the world’s poor remain unbanked: two factors that digital currencies can severely undermine.

Often the people who can least afford banking services are charged the most for them in the form of over-priced money transfer services, expensive currency exchanges, costly payment processors and risky cash couriers.

One of the major ways technology can enable financial inclusion is in making it cheaper and easier to send money quickly and safely. The World Bank’s data[1] shows that money sent home by migrants now represents one of the largest foreign income inflows to developing countries.  Eighty to 90 percent of remittance money is spent on basic necessities including food, clothing, shelter, healthcare etc.

Remittance funds are no small fry. Globally, remittance receipts (including both developing and high-income countries) were estimated at $563 billion in 2014 and are forecast to increase to $636 billion in 2017.  Typical remittance fees for sending $200 are around seven to eight percent.  Such fees are diverting money away from the recipients who need to keep as much of it as possible.

Uphold’s mission is to make it easier and cheaper for everyone to send, hold and receive money and allows its customers to do so only paying a small fee locally when the funds are withdrawn.  Users of Uphold’s platform, located in over 170 countries around the world, can upload funds through a variety of methods, including cash deposit, bank transfer, credit card and Bitcoin and send funds to other users regardless of their location instantly and for free. One of Uphold’s partners, LibertyX, allows access to bitcoin purchase and transfer using cash at 19,000+ plus stores across the US, many of which are convenience stores, and has become an increasingly popular tool for Latin American immigrants to store and send money abroad.

Users can also hold their funds on Uphold’s platform and swap it between currencies of their choice.  This allows users to protect themselves from fluctuating currencies and also have the option to store their funds in one of four precious metals.

The firm is actively working on partnerships to create more ways for people to access, send and hold money in more countries around the world.  It is also dedicated to keeping its pricing as low as possible, with the majority of services being free with the company instead charging small fees at the point of withdrawal of funds – it is after all intended to be a sustainable business model.

Diana notes that there is still much work to be done in working towards full financial inclusion via digital currency and platforms, such as access to connectivity and technology, educating customers on how to use the service and the technology that enables it, However electronic money transfer and digital currencies could be a powerful tool to enhance financial inclusion and much of its potential is yet to be explored. Moreover it can provide opportunities for those who live in unstable monetary regimes to manage their savings and payments by keeping their savings with Uphold in US$ for example or other more stable forms of value.

The point was made by some at the dinner, and agreed by Diana, that Uphold is not yet set up to reach the poorest who may even have issues with technological or even more basic literacy which will be a barrier to them accessing these services, unless through a grassroots partner that Uphold might work with. But we also concluded that the service fills an important gap in providing access to financial services to many who are unbanked or have limited access. 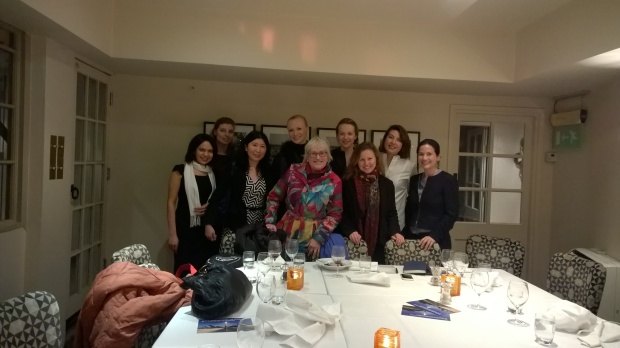 Event Attendee Group Photo  On the night, we discussed how decentralised blockchain currencies work, details of which are covered in a Q&A we did with Diana ahead of the event to bring us up to speed on this financial technology. It is clear that globally there is a lot of interest and momentum behind digital currencies and blockchain, however we do not often hear of strategies that grow financial inclusion or even consider it at all in their expansion plans. Diana gave us an interesting perspective as to how a disruptive, high growth technology could consider and be used to expand the global reach of financial services for all – including the unbanked and hard to reach – and therefore not exacerbate financial exclusion through a digital divide.